Four centuries of history with deep roots in the Turin area.

Ever since 1595, we have been focusing on the needs of individuals and families facing vulnerability or social and economic hardship.

Compagnia di San Paolo was founded by a group of citizens of Turin. Its main aims included supporting people in need and defending the Catholic faith against the threat posed by reform. Its charitable work mainly took the form of home care for poor people and for the nobility or wealthy members of the bourgeois class who had fallen into poverty and could not publicly beg for alms. Compagnia identified the nature and extent of individuals’ needs by collecting information and visiting the homes of poor people. In 1579, it launched a free pawnbroking service to protect vulnerable people against usury. 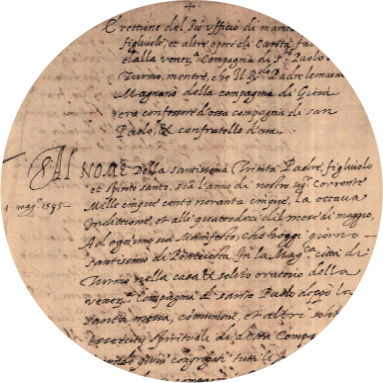 Ufficio Pio was founded on 14 May 1595, to bestow dowries on behalf of girls from poor families. Its founding charter contains the following description: “A charitable company or perpetual and indissoluble Office of Pious Works to facilitate the marriage of poor girls, who might otherwise be at risk of falling into sin”.

Compagnia soon extended its philanthropic work aimed at girls by opening the Casa del Soccorso delle Vergini, which changed its name to Opera del Deposito in 1683, to accommodate women of any status wishing to escape from a situation of “dishonesty”. Within a few years, Ufficio Pio took over the management of all of Compagnia’s welfare work, through aid to poor people who were ashamed to beg publicly, help for beggars and the infirm, religious services, the distribution of dowries and the payment of fees for women taken in by the Casa del Soccorso. 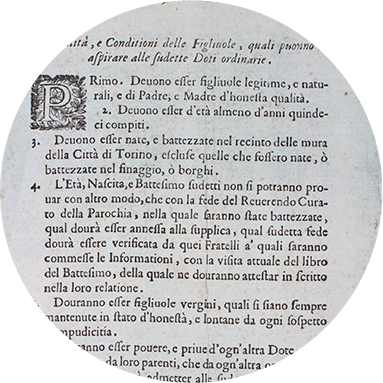 In 1612, Ufficio Pio began distributing alms to poor people who were ashamed to beg publicly.

As from the second half of the century, Ufficio Pio’s disposable income grew as a result of donations and private legacies. As well as bestowing dowries, Ufficio Pio also periodically distributed clothing to poor girls and conducted religious services for deceased confrères and legatees. 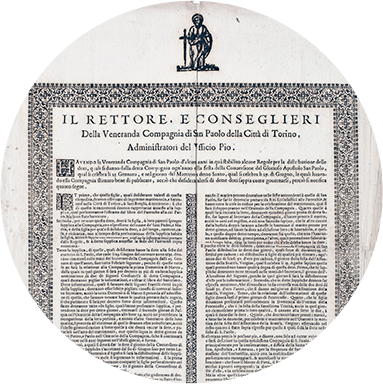 Compagnia di San Paolo was suppressed in 1802 by the French Republican government. It was not reinstated until the Restoration of 1815, when Ufficio Pio also resumed its work. 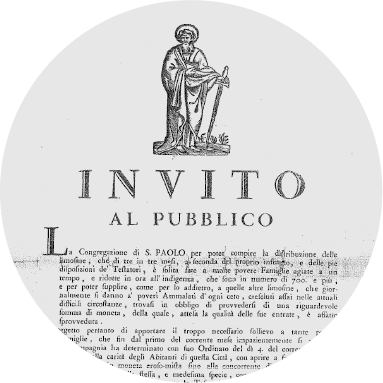 At the behest of King Vittorio Emanuele II, Opere Pie di San Paolo, later renamed Istituto di San Paolo, was formed as an endowment management body. The new body continued and modernised the work of Ufficio Pio and the Educatorio Duchessa Isabella (the name given to the merged Casa del Soccorso and Casa del Deposito in 1883). At the same time, the organisation established a formal description of the role of the “Commissione elemosinaria dell’Ufficio Pio e dei Delegati”, the name by which Ufficio Pio’s volunteers were known until as recently as the 2000s. 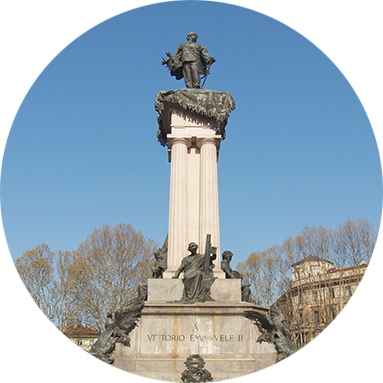 In the wake of the depression of the 1920s, one sixth of the population of Turin were on the municipal poverty list. In 1932, Ufficio Pio opposed the use of the Welfare Logbook laid down by the fascist regime, in order to protect the confidentiality of its beneficiaries and carry on its charitable work with greater autonomy. In the post-war years, despite the fact that the value of its endowments had fallen considerably, Ufficio Pio continued its work, thanks to donations from Istituto Bancario San Paolo, which, at the time, was embarking on the resurgence that would make it one of the largest groups in Europe. 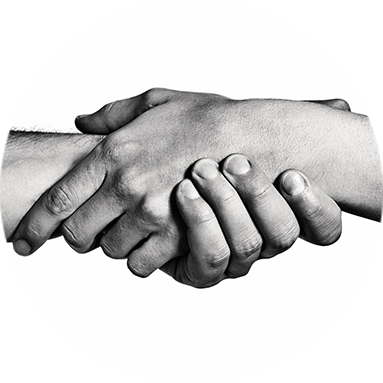 This period saw the launch of the “labour exchange” projects for unemployed people and educational initiatives for school-age children. 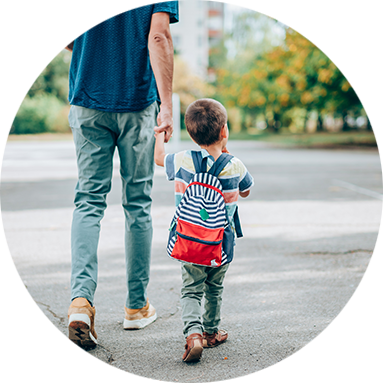 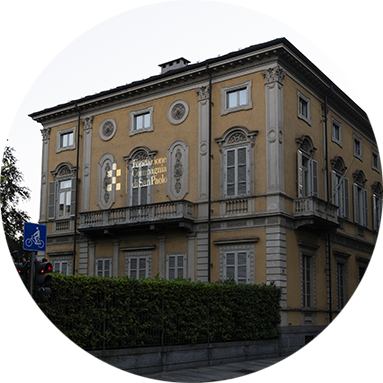 The scope of the organisation’s initiatives and its range of beneficiaries grew significantly during these years, to include Italian and foreign families, school-age children, unemployed people, people serving custodial sentences and homeless people. It then extended to include university students and, in the wake of the 2008 financial crisis, those segments of the population who became known as the “new poor” or “vulnerable”.

At the start of the new decade, Ufficio Pio adopted an innovative approach to project design known as “second welfare”, involving a mix of non-publicly funded social safeguards and investments that complement and mesh with public welfare, to make up for its shortcomings in terms of coverage and type of services. 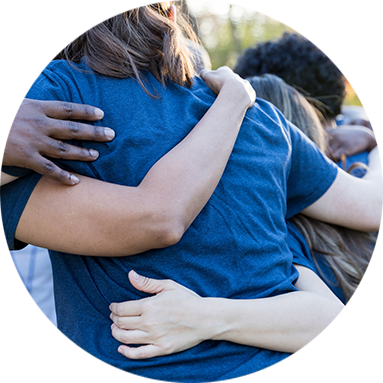 The salient feature of the past decade of work has been the pace of the organisational and project-related changes that have been undertaken. Ufficio Pio has backed up its experience of helping people in poverty (mainly through economic support), by road-testing innovative services and interventions aimed at countering the multiple aspects of economic and social inequality.

Thanks to the contribution of the European programmes, Ufficio Pio regularly conducts experimental evaluations of its interventions in order to measure their impact and determine how effective they actually are. 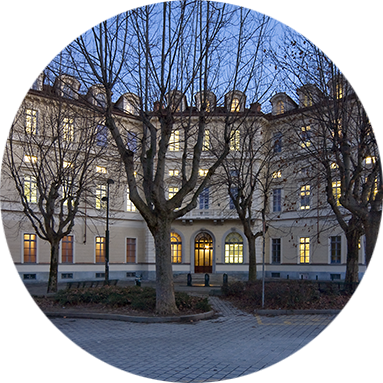